I had about three weeks between my 3B study term and my work term at Canoo. I have not been back in Asia since my grad trip in 2016. After booking the flights and the AirBnB's, I was only an ocean away from the nations of Taiwan and Japan.

Why did I decide to go to Taiwan & Japan, again?

After a 15-hour 😢 flight from Toronto Pearson to Taipei Taoyuan, I met up with my friends at the AirBnB.

With a full day ahead, we explored the Taipei Zoo to see some Pandas. Due to the hot and humid air, the glass was too fogged up for me to snap a good photo. That night, we had a meal at the Yao Yue Tea Restaurant in Maokong, which is this mountainous region near the Zoo. We were greeted by mosquitoes, light drizzles, and of course, great food.

After struggling a bit with the jet-lag, we went to check out the National Palace Museum. The museum has over 700,000 pieces of ancient artifacts. I've always liked going to museums in big cities (The Met, National Museum of China, Art Institute of Chicago, etc.). Despite my aching feet at the end of the day, I was especially awed by the jade cabbage and the "forbidden snack".

What better way to end the night then by enjoying the delicious street food at the Shilin Night Market.

We kicked off the day by having the obligatory Ding Tai Fung meal.

To aid digestion, we walked around Taipei and found some KFC egg tarts with pearls.

As for the night life in Taipei, my favorite combination was massage, dinner, and night market. We did exactly that.

To fuel our bodies for the day, we went to the famous Yong He Soy Milk King and devoured some soup dumplings, Chinese donuts, egg crepes, and soy milk (sweet and salty). I would recommend dipping the donut in the soy milk.

Jiufen, a scenic mountain town on the northeastern corner of the island, is the perfect day trip away from the busy city of Taipei.

Jiufen is home to the famous teahouse that resembles the town in Spirited Away. We already took enough pictures the last time we came, so we just grabbed some tasty snacks on the narrow, winding old street and headed down to the coast.

After driving down the serpentine highway, we arrived at Yin Yang Sea, Golden Waterfall and the Remains of the 13 Levels.

I really enjoyed these less well-known attractions. It was like seeing Jiufen from a brand new angle -- an angle with less tourists and more natural scenery and history. As the sun slowly set behind the Keelung mountains, we arrived at the last destination, Shifen Old Street.

The Old Street was lined with a bunch of lantern shops and restaurants on both sides of a train track. After taking a quick stroll on the Shifen Old Street, the night fell and we lit up some sky lanterns with good wishes written all over.

After returning from Jiufen, we grabbed dinner at Lin Dong Fang Beef Noodles.

Around noon, after checking out of our AirBnB, we took the Taiwan High Speed Rail (HSR) from Taipei Main Station to Zuoying Station in Kaohsiung. Kaohsiung is a huge port city in southern Taiwan, home to many skyscrapers, cultural attractions, night markets, and of course, great food.

After dropping off our baggage, we rested a bit and headed to Liuhe Night Market via the MRT. On the way, we checked out the Dome of Light at the Formosa Boulevard Station.

Near the Formosa Boulevard Station exit, the Liuhe night market was lined with food stalls serving fresh seafood, meat, dumplings, noodles, and many other mouth-watering cheap eats. Definitely come here with an empty stomach and enjoy the variety of Taiwanese street food.

We went on a day-trip to Cijin, an island just west of Kaohsiung, for the first full day in Kaohsiung.

Then, we headed for the island on a ferry.

After renting out a four-person cycle, we set out to explore the island. There were many instagram-worthy attractions such as the Rainbow Church and Sea Pearl 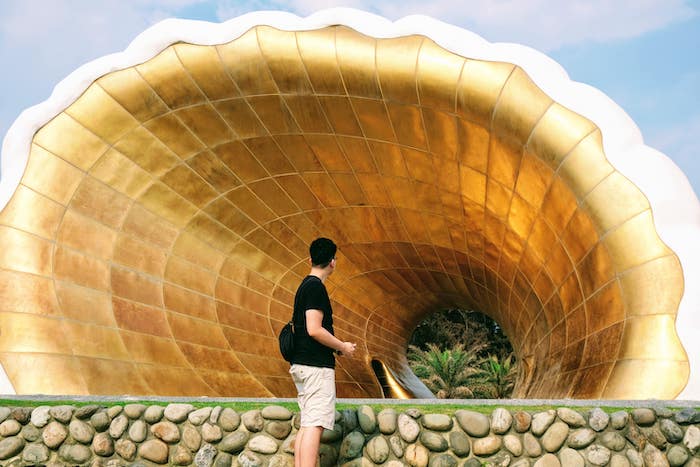 After a jam-packed day, we worked up quite the appetite. Duck Zhen was a local spot that serves, you guessed it, duck.

We were lucky to get a table right when they opened for dinner; a line formed very quickly as we sat down. We were huge fans of the braised duck over rice and duck soup. With our stomachs full, we headed back to our AirBnB in Zuoying.

When we woke up, a typhoon was on its way to western Taiwan. So we stayed indoors and played at Tom's World arcade near our AirBnB. 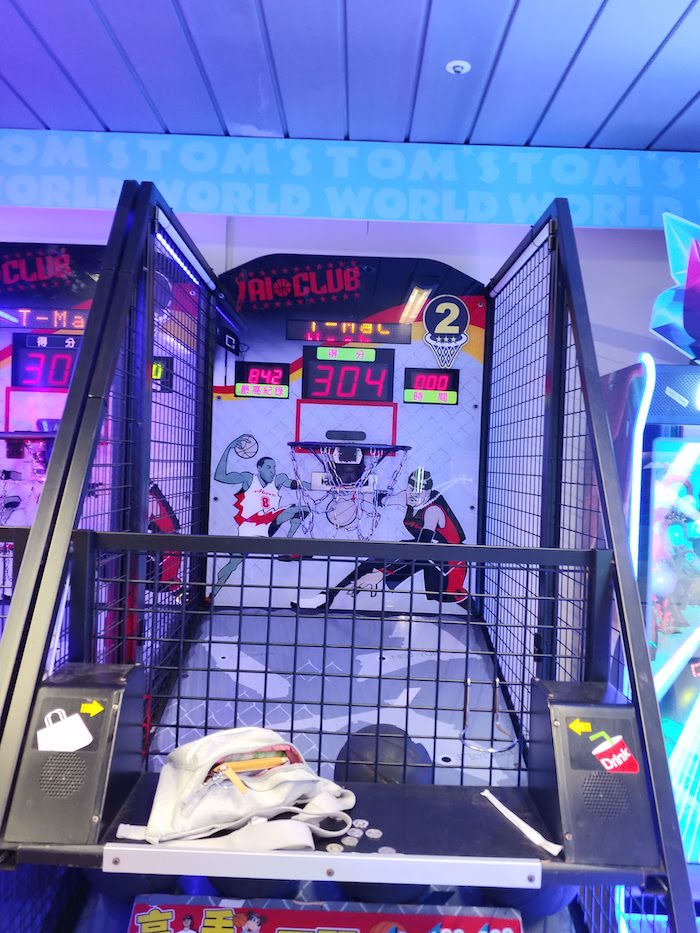 Around dinner time, the skies cleared up and we went to a bar and Karaoke-ed our night away.

In the morning, we taxi-ed to Ren Wu Kao Ya (Ren Wu Roast Duck). We waited in line for about 30 minutes before devouring a plate of freshly-roasted duck.

In the afternoon, we strolled around the Kaohsiung Confucius Temple and Spring & Autumn Pavilions.

After a light breakfast, we checked out of the AirBnB and headed to Taichung via the HSR.

We arrived at our AirBnB at 3PM. Our AirBnB is a modern concrete villa that was built by the owner, who was an architect.

Then, we headed to our bubble-tea making session at the original Chun Shui Tang, which is known as the inventor of the popular beverage.

For dinner, we indulged in some hotpot nearby.

As the night fell, we headed back to the AirBnB and enjoyed the view in the glass penthouse.

For our first full day in Taichung, we hit up Miyahara Ice Cream/Gong Yuan Optical to check out the ophthalmology clinic turned to dessert shop.

After a quick lunch, we took a taxi to the Rainbow Village.

Unfortunately, we didn't have enough time to go to the Gaomei Wetlands to catch the sunset, so we ended our day with some drinks and games at the AirBnB.

It was time to wrap up our journey in Taiwan and head to Japan.

We arrived in Taipei via the HSR and headed to the Taoyuan Airport right away to catch our flight at midnight.

After arriving at the Kansai Airport at 3AM, we took a bus to our AirBnB near Namba. We crashed for a couple of hours to recharge.

Our AirBnB was really close to Dotonbori, the bustling street filled with food and shops. We walked around and had BBQ at Yakiniku Rokko.

After stuffing ourselves with wagyu beef, we went to Grand Cyber Cafe to play some billards (they had AYCE ice cream and soft drinks).

After sleeping in, we headed to Universal Studios Japan west of Osaka. Since we arrived after noon, we got a discounted half-day ticket.

Some of my favourite rides were

We were able to go on most of the major areas/rides in the park as the lines weren't too long (we didn't have a Express pass).

We stayed until the park closed to watch the parade.

One perk of living near Dotonburi is that you don't have to look too far for a place for a late night drink/snack. We went to Torikizoku for some drinks and yakitori.

For our third day in Osaka, we walked around Dotonburi, America-mura, and the Shinsaibashi area.

Some of the notable food spots were

Ichiran Ramen - One of the most famous chains. You get your only little stall. Cusomize every aspect of the dish (noodle firmness, soup richess, spicyness, etc.). Please get the egg and extra noodles.

We also did some shopping at Don Quijote, the perfect store to buy souvenirs, snacks, electronics, alcohol, etc., all duty-free.

After a very Japanese breakfast at Sushizanmai, we took the train to the Hanshin Koshien Stadium to watch the Hanshin Tigers play

The Tigers used to be the baseball team for Osaka. Despite their poor performance in recent years, the Tigers has very devoted fans. We were in awe of the loud chants for every player when they were at bat. We got to take part in the tradition of releasing hundreds of air-filled balloons in the seventh inning.

Here's a cool article about the Curse of the Colonel.

After the game, we grabbed a quick dinner at Ichiran and headed back to the AirBnB.

After 4 days in Osaka, we left the port city and headed to the old capital, Kyoto.

We checked-in to our AirBnB near Kyoto Station and did some shopping at Yodobashi Camera and UNIQLO.

Japanese fast food for breakfast. There was a Sukiya near the subway.

Kyoto is famous for its traditional temples and shrines. Our first attraction today is Kinkakujicho, or the Golden Temple.

For dinner, we went to Katsukura in the Kyoto Station building. Honestly one of the best tonkatsu's I've ever had. The portions were huge and we got to grind our own spices for the tonkatsu.

We took some rest in the morning as a storm passed by Kyoto.

At night, we went to grab some Okonomiyaki.

As the skies cleared up, we took the train to the Suntory Yamazaki Distillery south of the city.

We got to learn the history and the crafting process of some of the most famous Japanese whiskeys. We also tasted some of the aged varieties of the Yamazaki and Hibiki whiskeys.

In the afternoon, we visited Nijo Castle. The Nijo Castle is home to palaces that used to be the residence of the Tokugawa shoguns. One memorable feature was the "nightingale floors" that made chirping sounds when walked upon. This was thought to alert residents of potential assasinations.

Luckily, the Menbaka Fire Ramen was near the Nijo Castle. So we went for some delicious fire show.

It was time to say goodbye to Japan. We took an airport bus to the Kansai Airport.

After a final meal, my friends left for their flights back to Canada while I have one more night to stay at the airport in a capsule hotel before flying to LA.

As the trip came to an end, I prepared for my upcoming coop term at Canoo.